1919
Our company‘s long tradition began with its founding on August 14 1919 by Christian Goedeken Senior. Together with his son, Christian Goedeken Junior, he soon shaped the company into a specialized business for international seafood products.It didn‘t take long after that for the newest offers to be published regularly in a „Fish Newspaper“.

1935
By the 1930‘s, the company was a dependable partner in delivering fresh fish to its customers in handy portions, and ready to cook.

1998
After Christian Goedeken jr. temporarily belonged to the Unilever group, our current owner Karl-Heinz Führer took over the company in 1998, giving it a new structure and orientation. The company also moved to a new location, where the production of high-quality seafood convenience products was expanded.

2016
Today, Christian Goedeken jr. GmbH regularly supplies over 100 wholesale dealers in Germany, and has once again become a real family business based in Germany, with Martin Führer as a fellow partner. 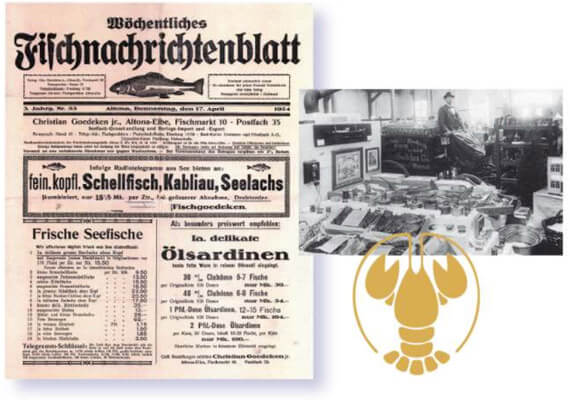 Constant innovation The labor saving products made by Christian Goedeken jr. are constantly updated and unique: They come ready to serve as appetizers, for banquets, and á la carte. They look good and taste perfect.

Highest quality standard We are certified according to different standards. MSC for the use of fish from a sustainable fishery and ASC for controlled breeding.

Exact portioning at highest quality standards. You inform us about your wishes. If you place an order above a certain minimum size, we can fill special requests with a precision of 10g. In order to maintain our high quality standards, we are certified by the international Food Standard.

Healthy Food Christian Goedeken jr. does not use preservatives, artificial colors or flavors. Our taste is delivered by nature. The best raw materials and finest spices make our fish into “healthy food”.

Have a look at our delivery program

Please leave your e-mail address – we will send you a PDF catalogue right away.